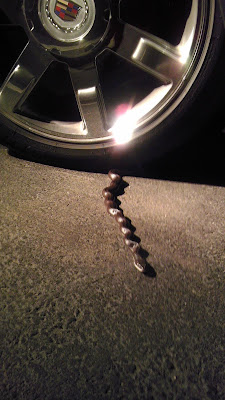 What the eff?!! It sat there waxy and motionless, like a rubber toy snake. Was it fake? Why isn’t it moving? Why is it all…wrinkly like that? After a moment, I crouched for a closer look. 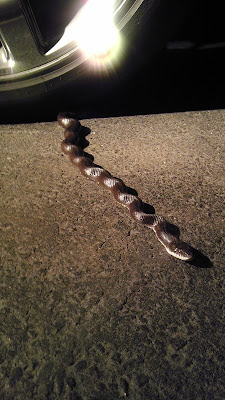 Still no movement. Now I’m sure it’s fake. I got my purse out of the truck, careful not to get too close to it, fake or not. When I opened the passenger door, I blocked the light coming from my garage for a second and could have sworn I saw it move. 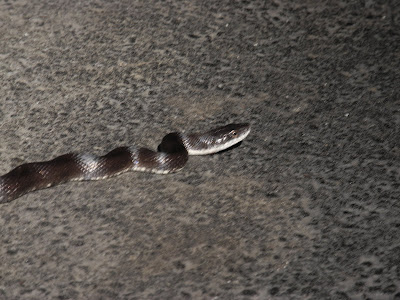 I wasn’t sure that it actually moved, so I blocked the light from the garage again on purpose, to see for myself. It DID, it moved! See how it’s head is in an L shape now, when it wasn’t at first?

It was seemingly wedged under my neighbor’s tire, as if he’d accidentally run over it and now it was stuck and couldn’t move and was likely dying. At least, that’s my theory for why it never slithered away, and why it was shaped so strangely. You can even see a bit of its tail behind the tire below. 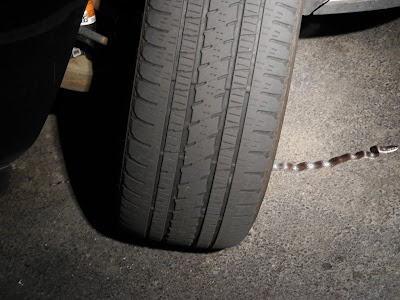 What could I do? I went in the house and straight to bed. I told my neighbor about it, but he didn’t move his truck this morning, and when I went outside before work, it was gone! Where’d it go? And why didn’t it move the night before if it could? It even gave me a bad dream!