Happy Birthday 7-Eleven! Since today is the 84th birthday of 7-Eleven, the company celebrated worldwide by offering free slurpees to everyone! How yummy, despite it’s size: 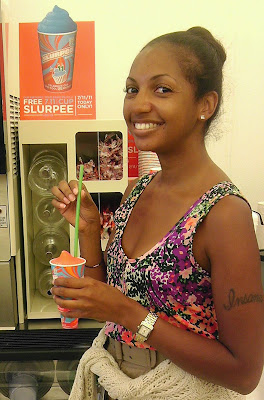 Did you know that the Slurpee was invented in 1967?

Did you know that in July 2002, 7-Eleven introduced the Slurp & Gulp for a limited time: a 54-ounce plastic cup intended to hold 22 ounces of Slurpee and 32 ounces of Big Gulp. The two drinks were combined and covered with a domed lid with holes for both a Big Gulp straw and a Slurpee spooned straw.

Did you know that Japan has more 7-Eleven stores than anywhere else in the world? With 39,153 stores worldwide, 12,925 are located in Japan, with 1,713 in Tokyo alone, usually bearing the name “Seven & I Holdings”.