After visiting Athens, my fairhaired friend, April, and I took the hydrofoil–a highspeed boat–to Santorini.

NOTE: I tend to spare the details of transportation, because nobody wants to hear about the cattle herd that is airline travel. Nobody cares that April and I didn’t have our luggage for more than 24 hours in Athens (thanks a lot, Air France) nor that I left my passport in the cab from the airport and almost cried about it (an actual thanks to the sweet taxi driver who returned to the hotel to drop it off!!) nor that airline food sucks–because everyone knows that these are the perils of travel.

But riding the hydrofoil is just as much a part of this trip experience as any other, and you should know about it.

Santorini is about 180 miles southeast of Athens, or the port near Athens, called Piraeus. A normal ferry takes 9 hours to travel this distance, but a highspeed boat, or hydrofoil, takes 4 hours. [The hydrofoil stops running in early September.] It could possibly take 3 hours, but it makes 3 additional island stops along the way where passengers depart and new passengers board the boat. If I’d researched this information before buying the boat tickets with my airline and hotel package, I may have opted to fly instead. [Note: the hydrofoil tickets had to be FedExed to me, so I had them in hand before I ever left the States.]

What I wouldn’t have discovered, even with research, is that this method of transportation is a disaster. Once you board the huge vessel, there is a cargo area intended for cars, motorcycles, and your luggage. You just put your bags wherever you see a space for it. If 50 people do this, you could safely and easily find your luggage once you deboard the boat. If 500 people do this, well…you can imagine the chaos. And remember–the boat makes three stops before we made it to Santorini. What’s to stop anyone from taking your bag? Absolutely nothing. I suppose the same could be said for the baggage belt at the airport but that procedure seems much, much more controlled. 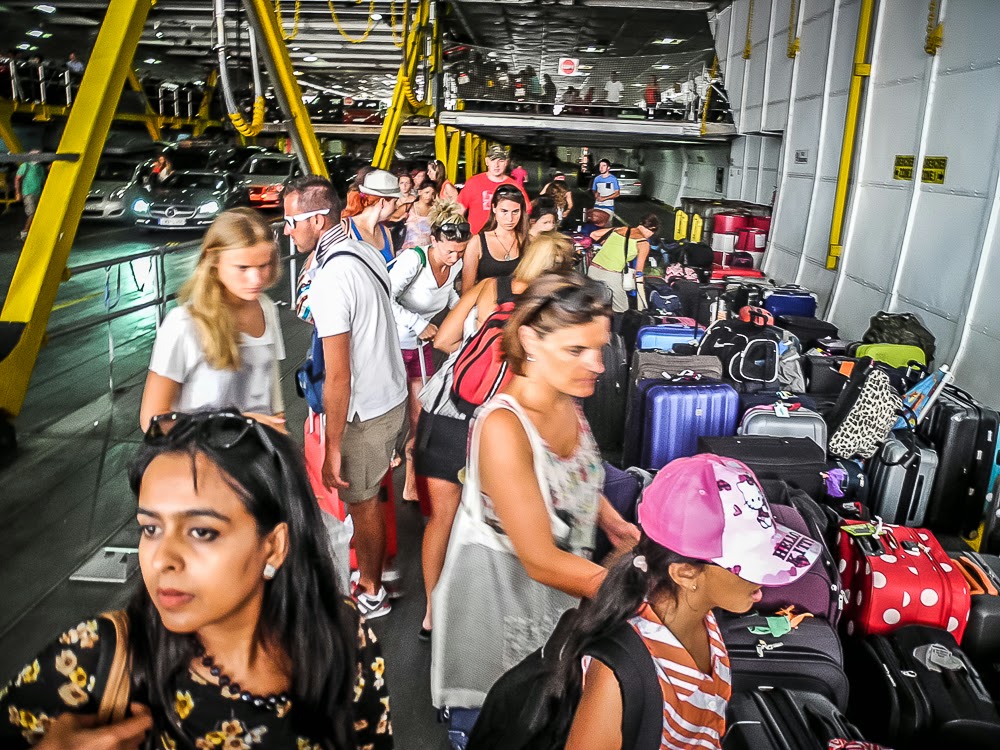 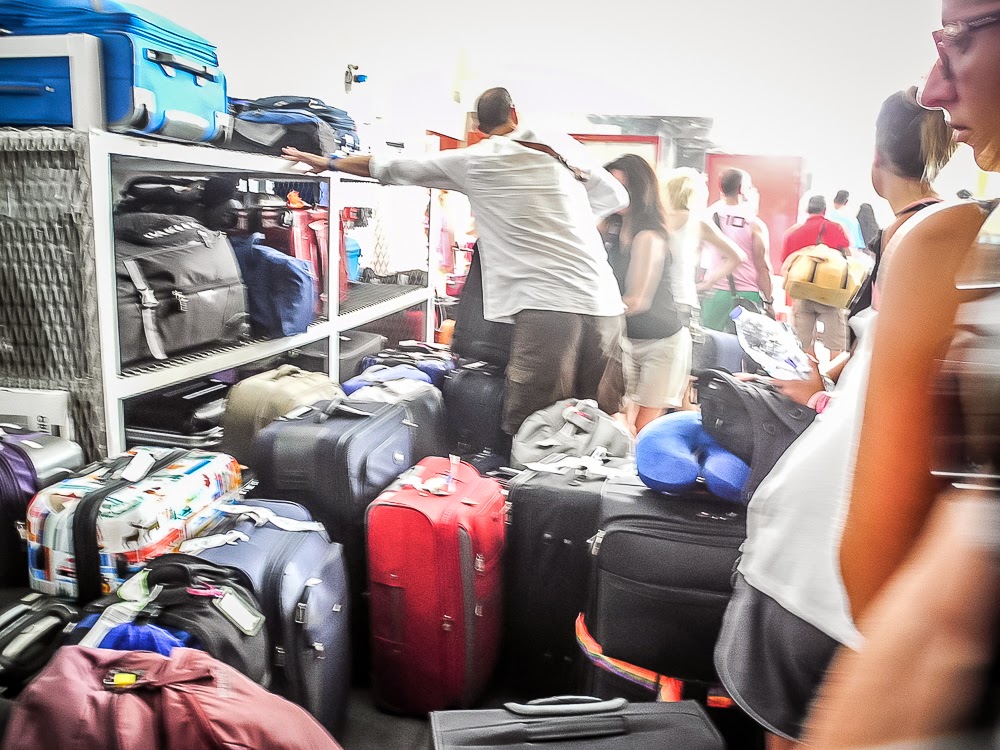 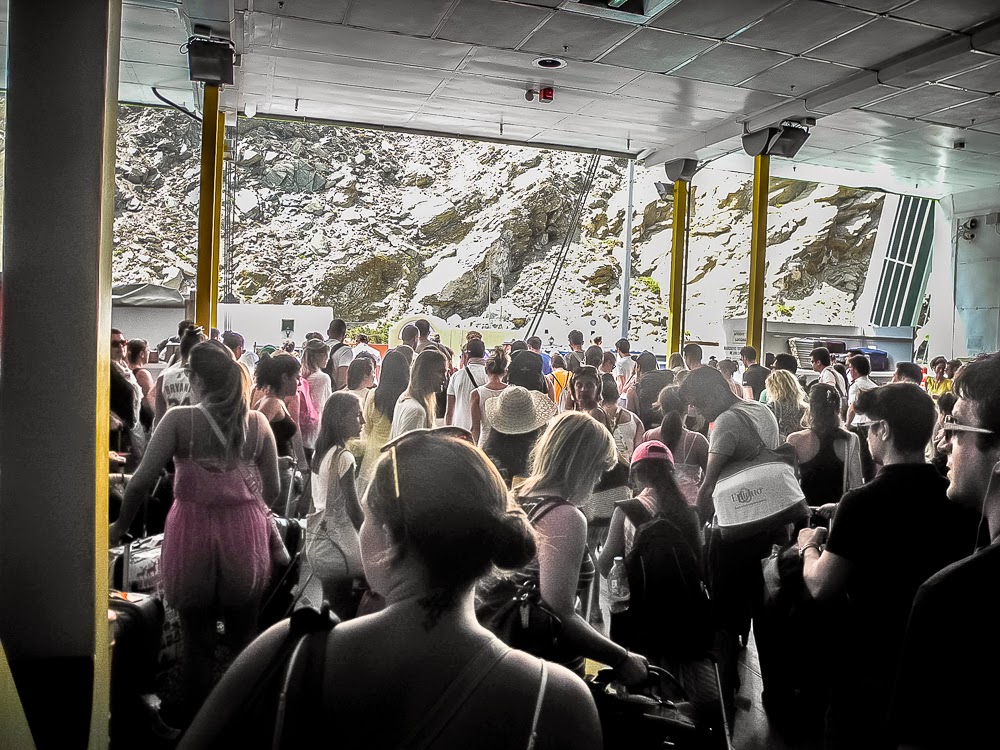 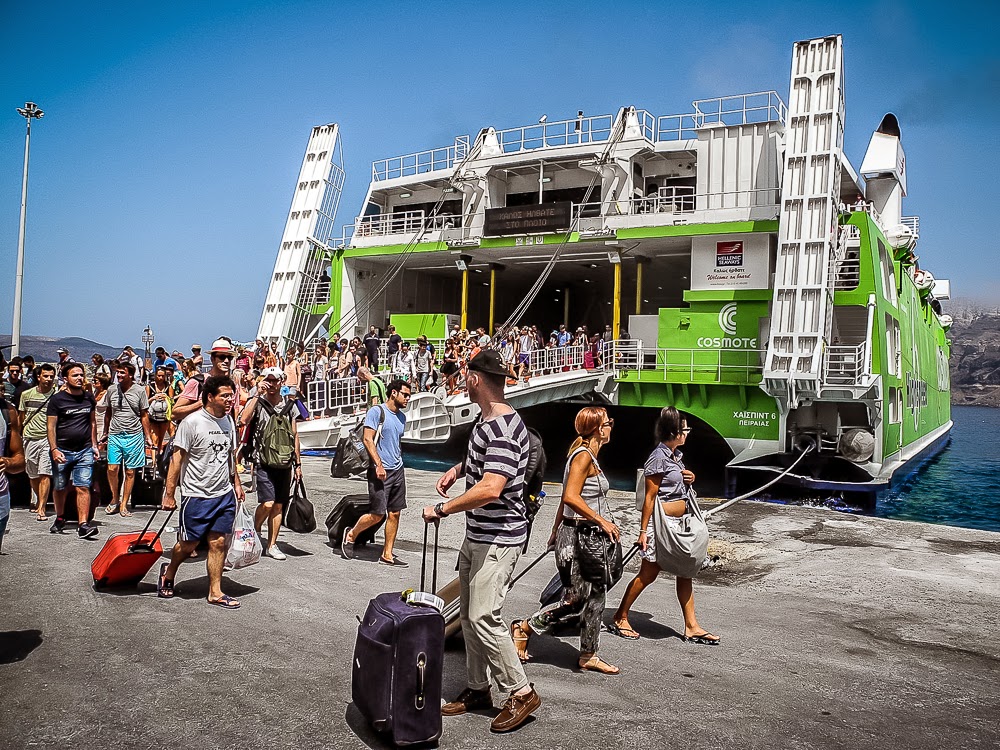 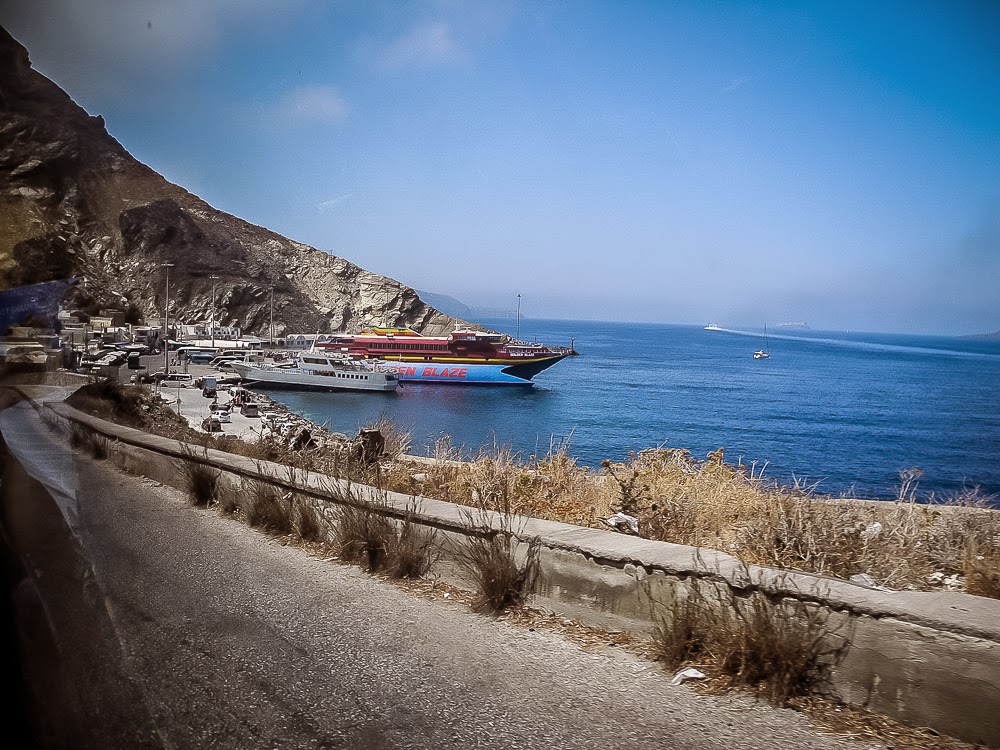 Tip: Do whatever you can to arrange transportation to your hotel once you arrive. The taxi situation at the port was awful, but we found a van driver who charged 20 euro for the both of us to take us to our hotel. Was it worth it? We found out that it was, because the ride took about 30 minutes, even though Santorini only consists of 28 square miles. 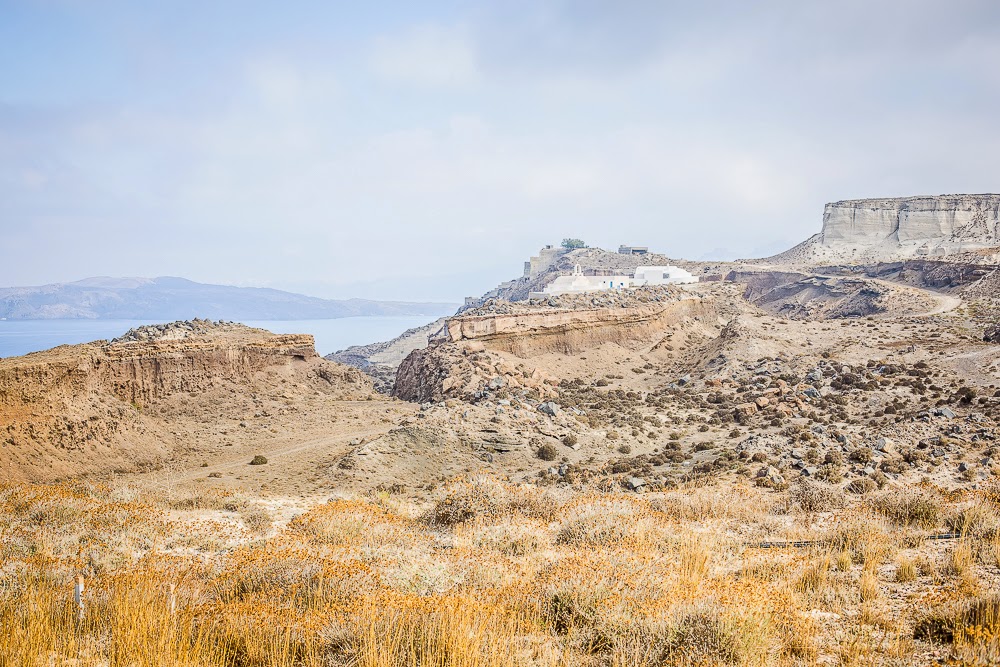 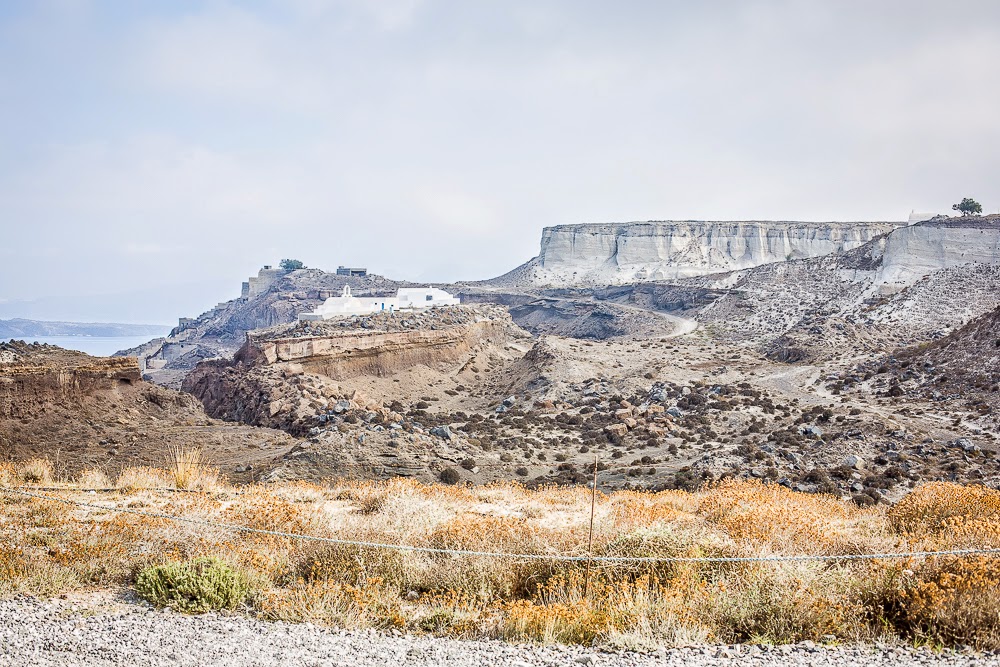 We found that looking away from Santorini usually yielded better results, like this. 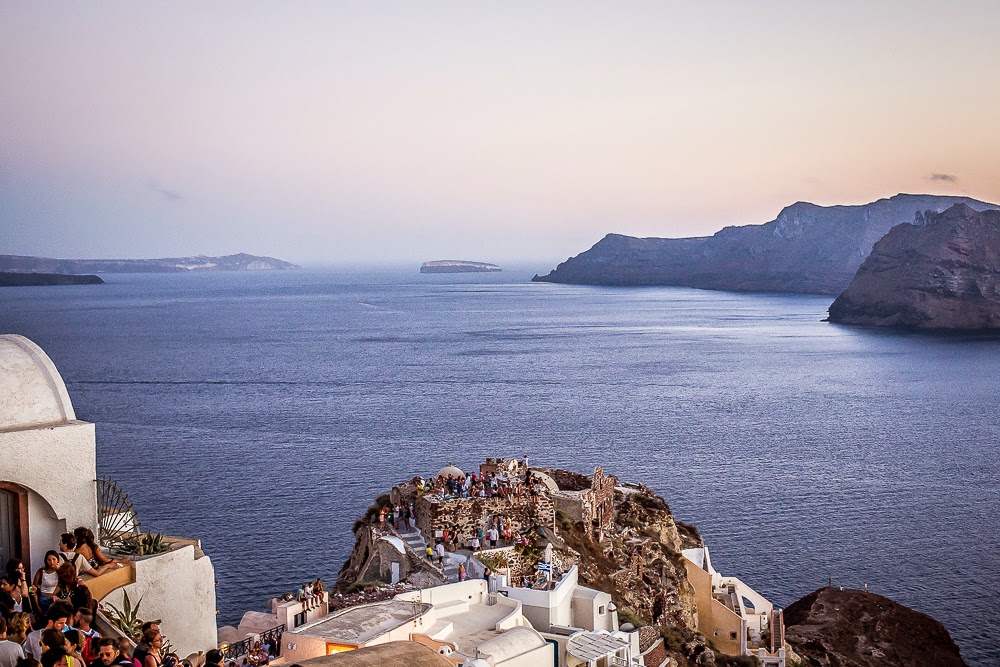 We stayed at the Meltemi Village Hotel, and this was our first view once arriving at the front desk. 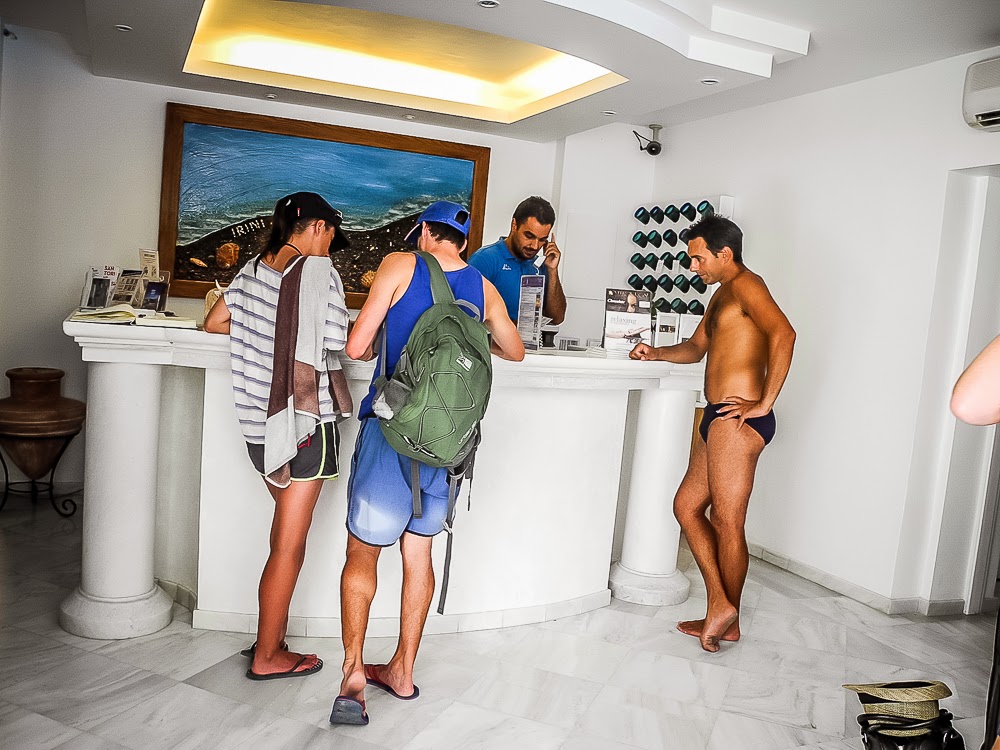 The man in the speedo had his cell phone tucked into the front. That made us giggle.

Our room at the Meltemi was pretty sweet, with an awesome shower and personal outdoor tub. I would call it a hot tub but it wasn’t hot–great when it’s still 95 degrees out. 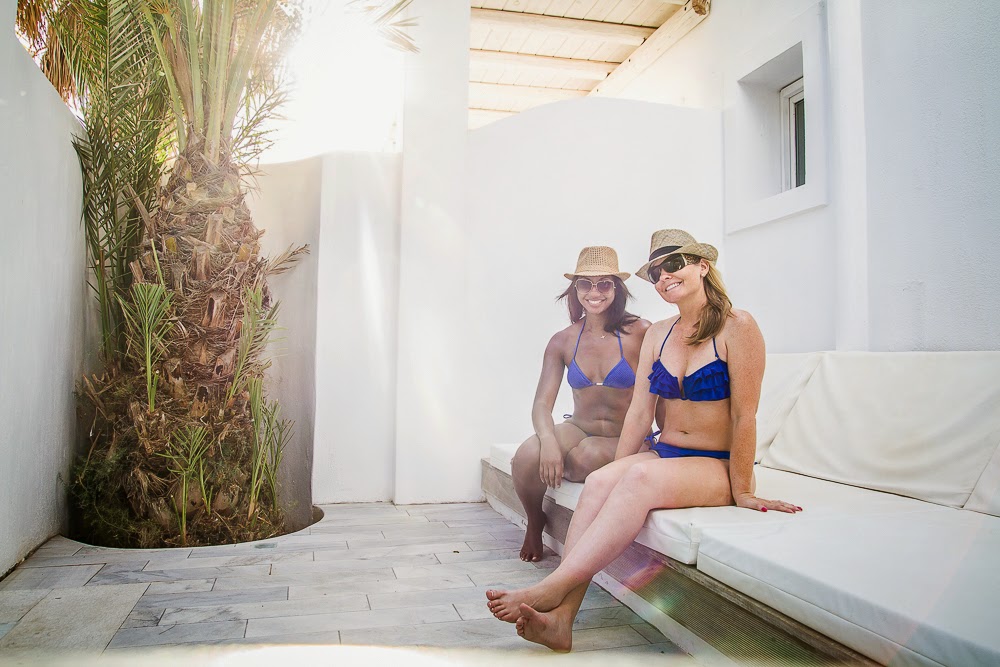 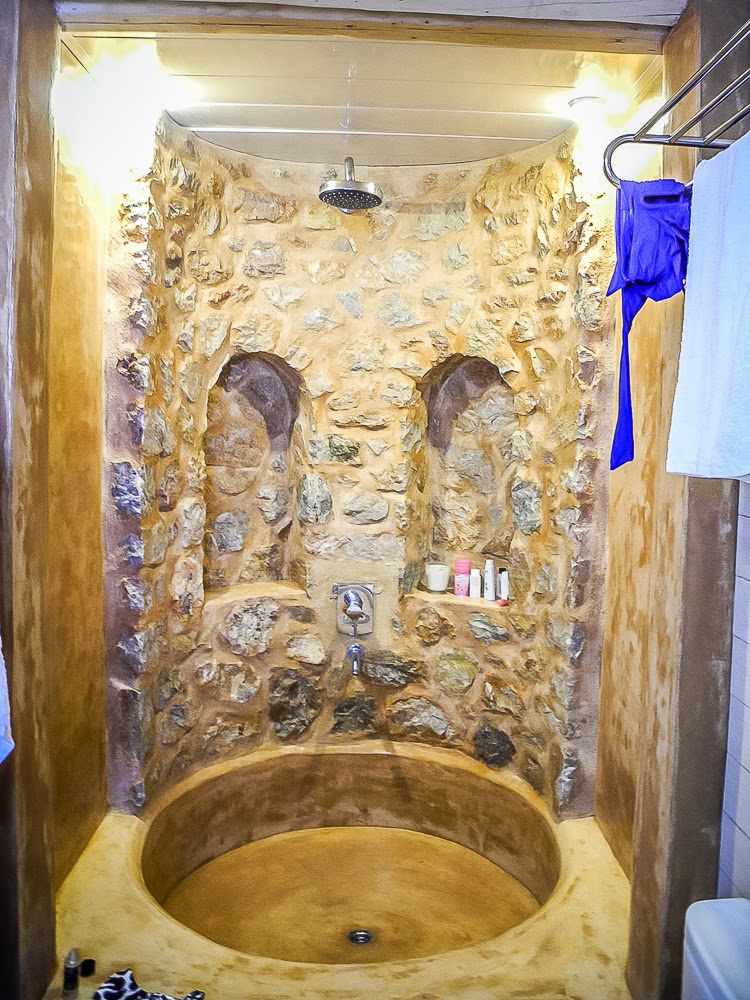 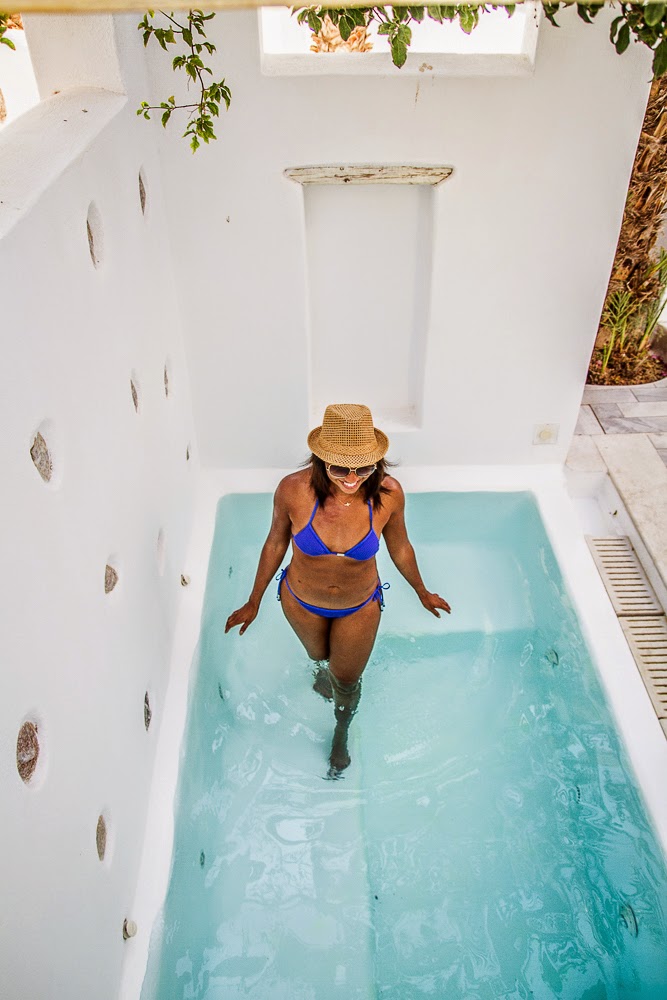 We booked it to the nearest beach as soon as possible, which was just a 10-minute walk from the hotel on narrow roads without sidewalks. There was no breeze, and it was so, so, so, so hot.
Sidenote: When I was younger, I remember R. Kelly singing a song about “making love on jet black sand.” I wondered, “Where the heck can you find jet black sand?” I realize that there are a few places in the world to find it, and Santorini is one of them. I was excited to finally be there to see it!
Finally made it to the beach. Wow, a black beach! As we got closer, we realized what the beach was made from. 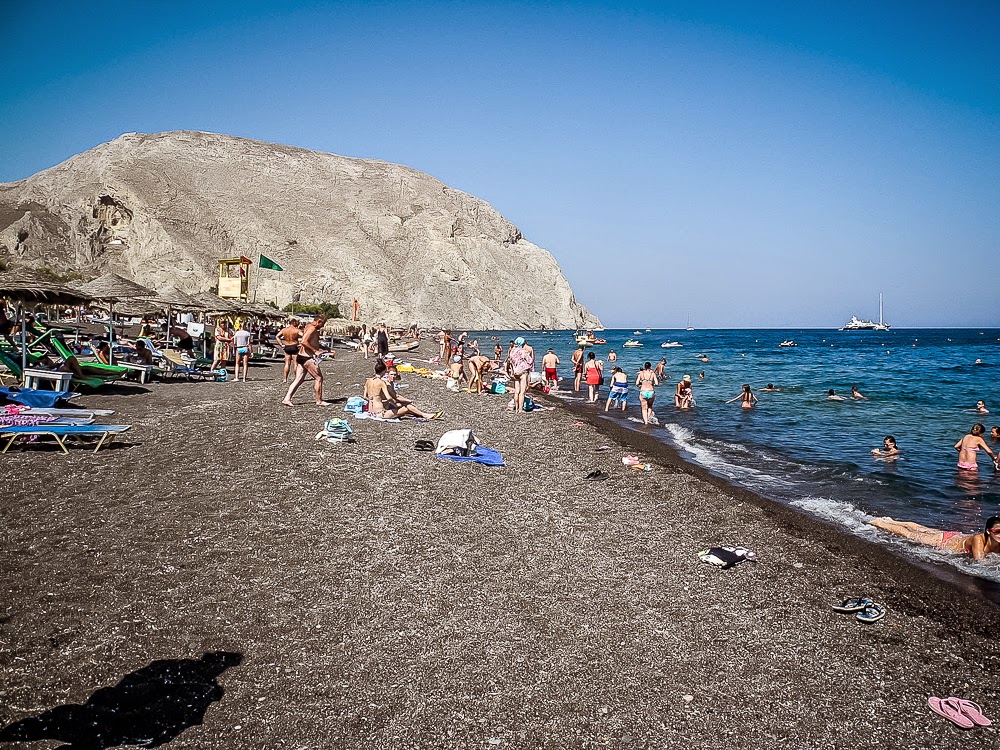 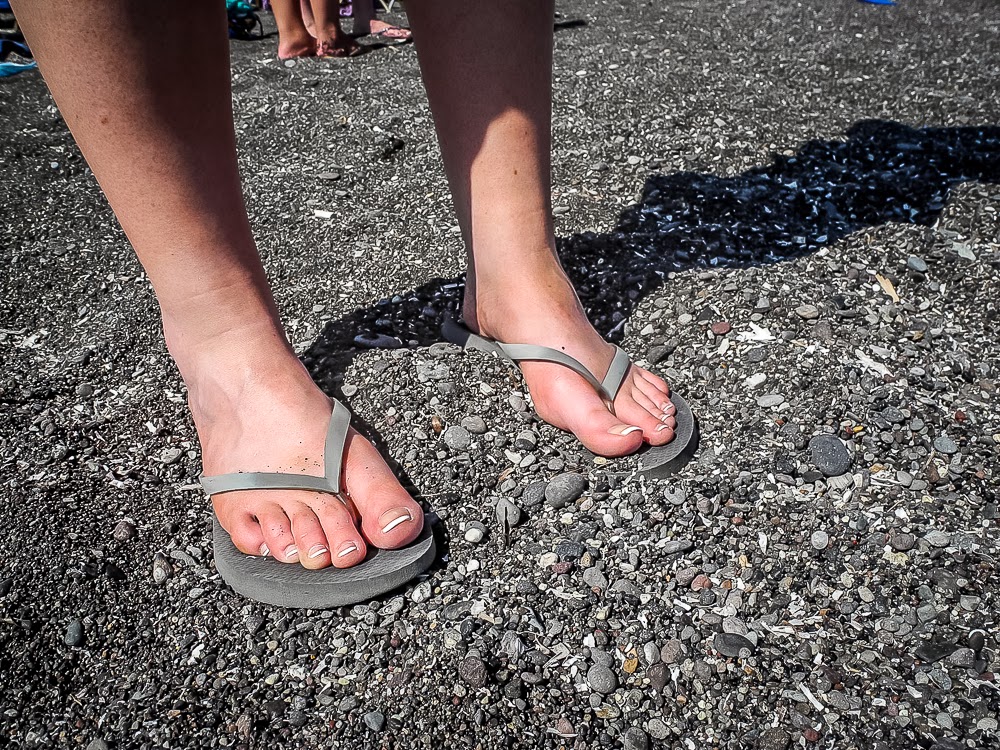 Rocks. Lots and lots of big rocks. How people walked barefoot on these rocks was beyond me.

Views from the restaurant. 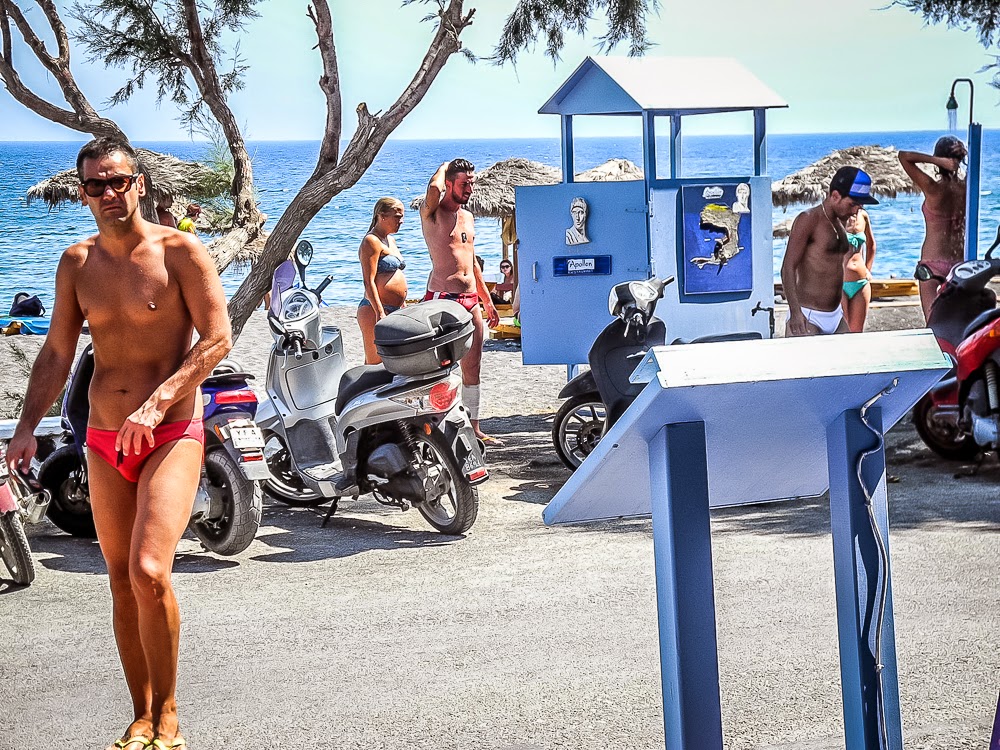 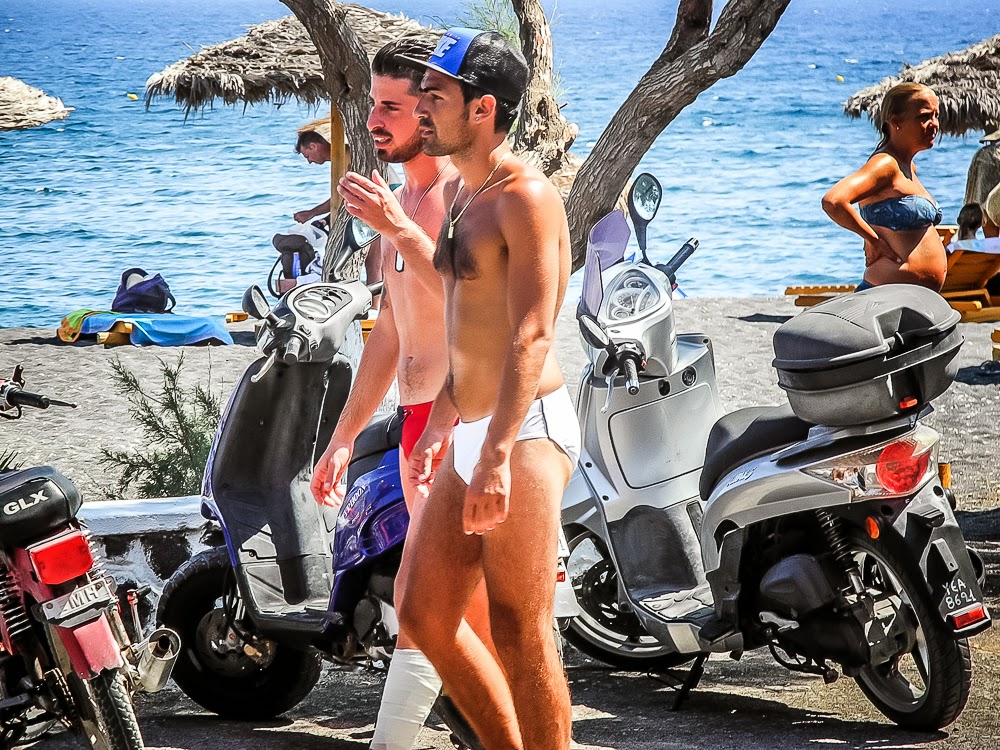 Poolside the rest of the afternoon. 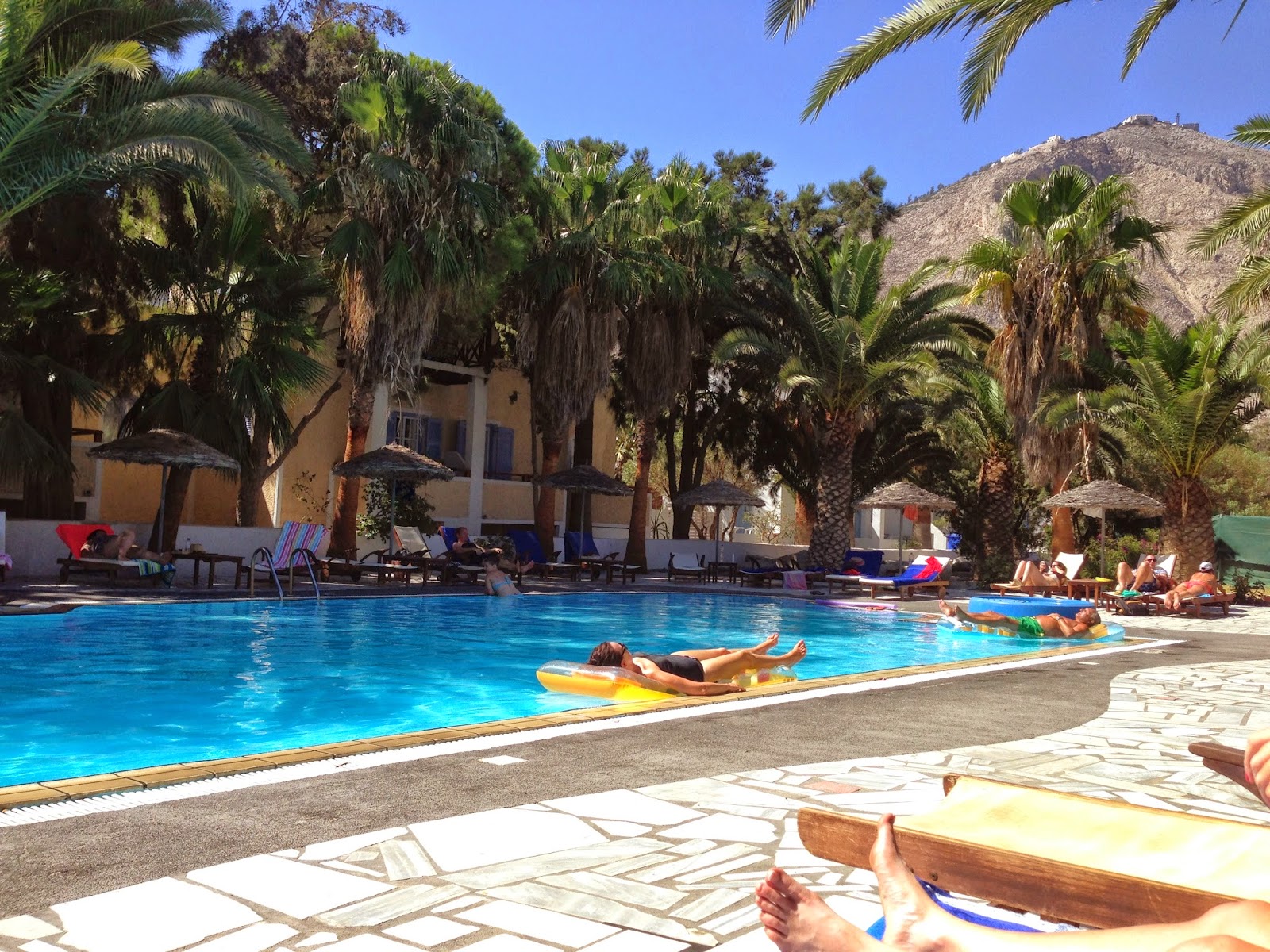 Later, we headed back out for dinner. Finding a restaurant with a table, amongst the many along the black beach, took four tries. We finally found a table at Atlantis, in connection with our hotel.

The next day, we rented a car and drove to recommended locations in Santorini (according to TripAdvisor). In case you are wondering, there are tours in Santorini, and they take you to one or two places: the hot spring between the tiny island where the volcano is located and another tiny island nearby, and to the volcano itself. These are both boat tours, and you are allowed to swim in the Aegean Sea to feel the hot spring for yourself. You are reminded that the water there is a muddy brown and not to wear jewelry because it will be ruined by the sulphur in the sea, due to the live volcano nearby. Since I can’t swim and it’s 95 degrees already, swimming in a hot springs or walking on a very hot, live volcano seemed like two bad ideas in one tour, so we opted out.

We picked up our tiny car (a Micra, tiny like a Honda Fit, for 65 euro per day). First, we drove to the Red Beach. Let’s see if it’s any better than the black beach. We even donned our bikinis just in case. 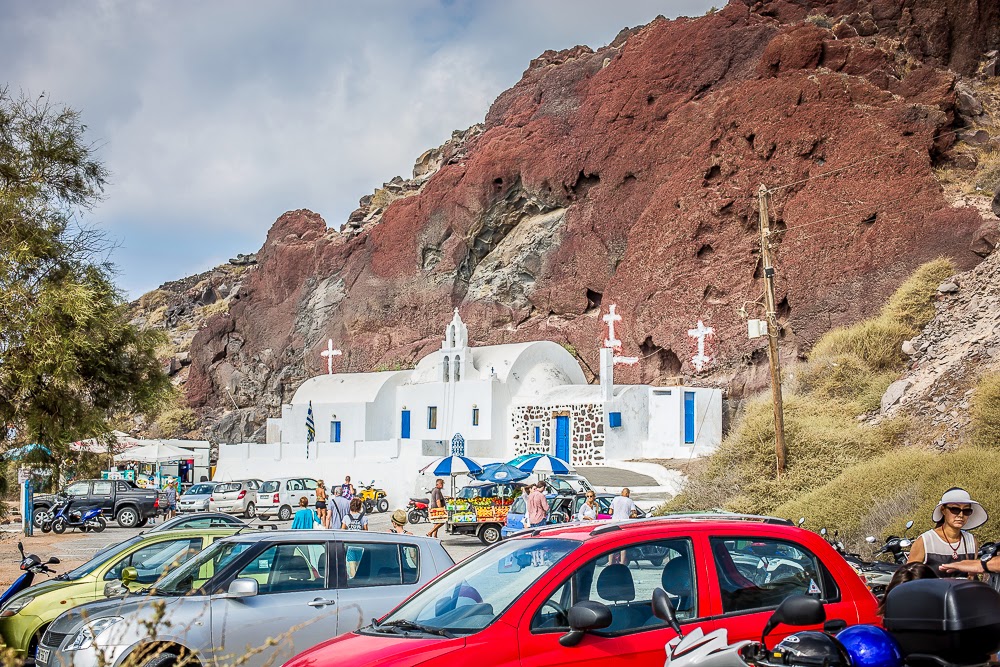 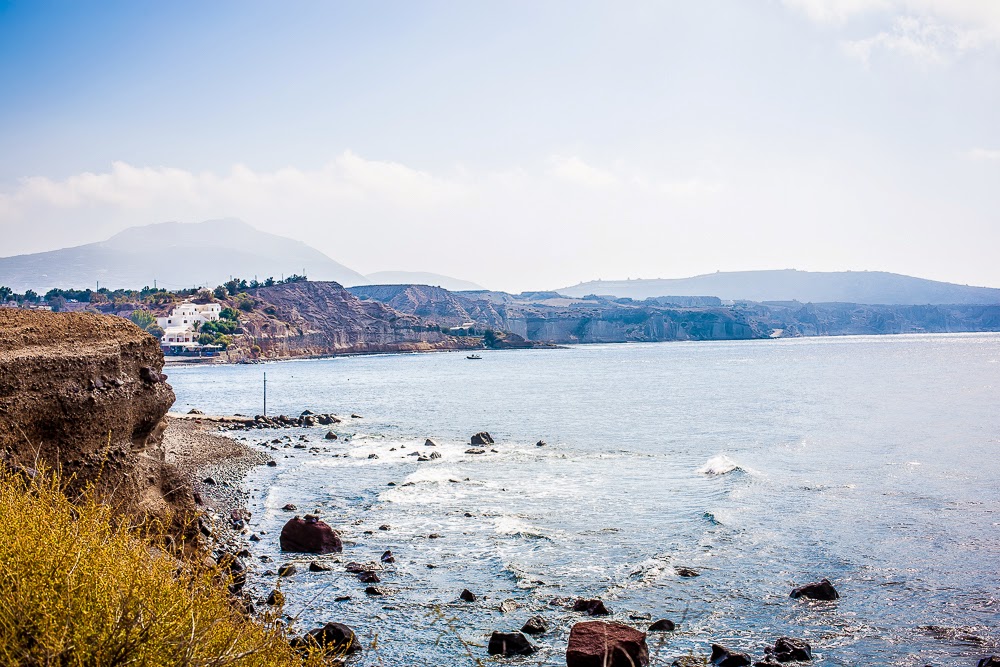 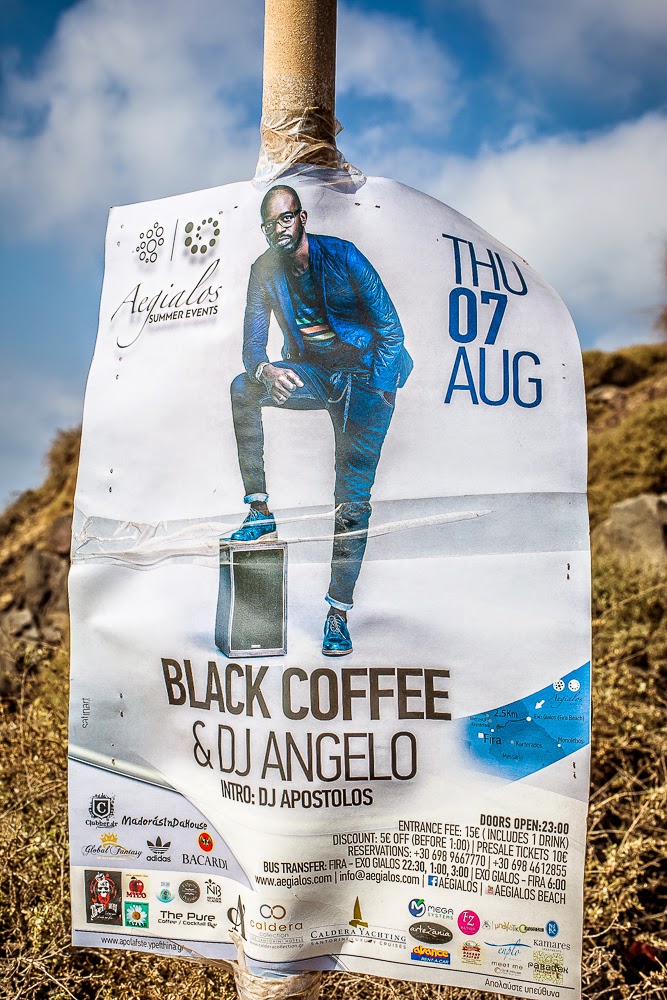 We jumped in the car and headed to the one of two towns in Santorini, the capital: Fira (or Thira). This…THIS is the site of many epic photos taken in Santorini, the cause of adulation and wonder. We also took photos of a hotel resort on the way, which resembles much of the smooth, white architecture of Santorini and many other Greek islands. 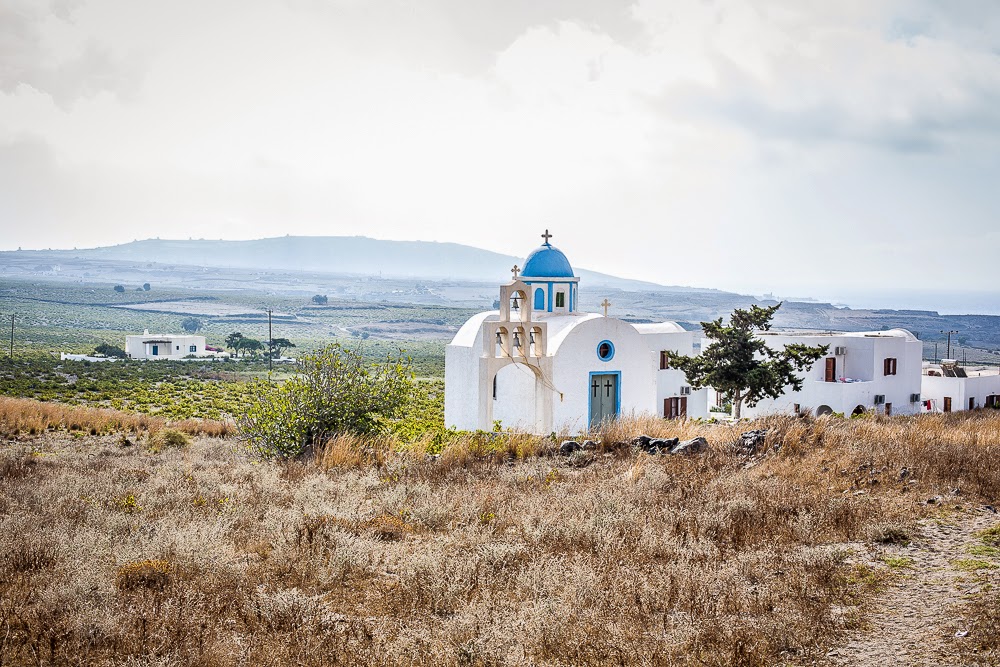 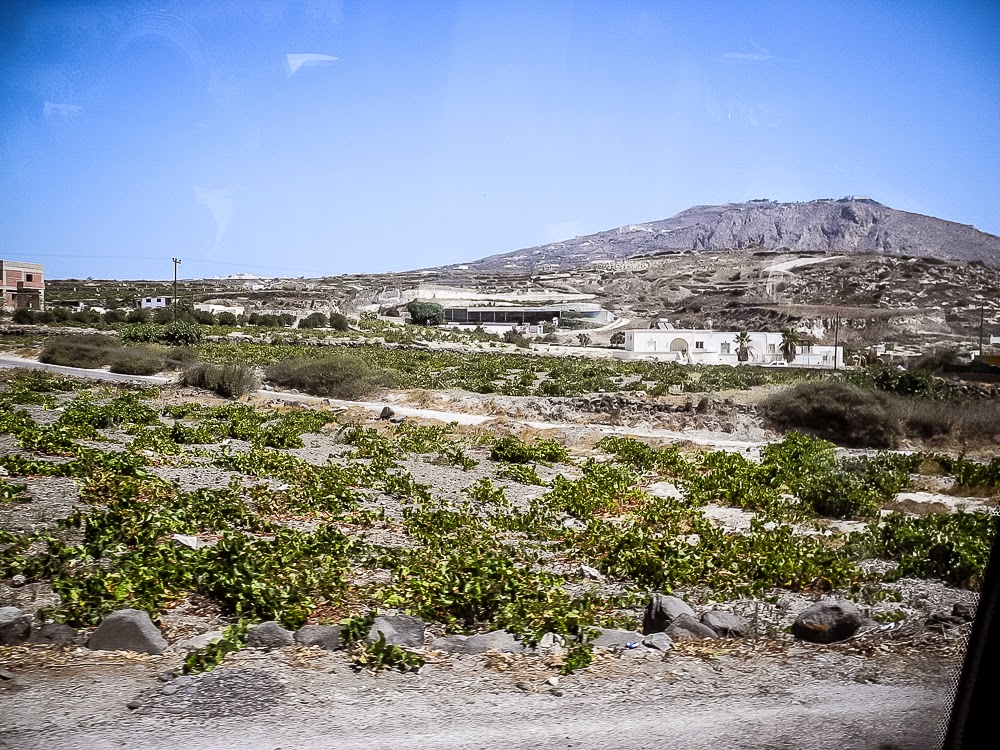 Then we headed further north to the northern tip of the island, and where we heard people flock to see the sunset every day, a town called Oía.
Oía was apparently the busy part of town. Lots of tourists were there shopping and there was a long marble walkway to traverse. 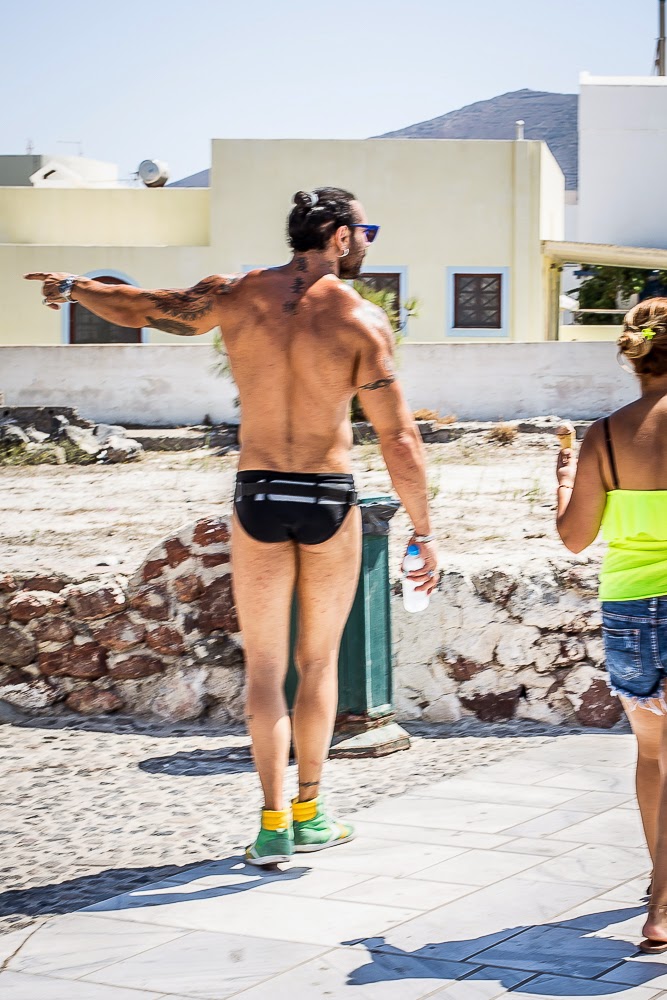 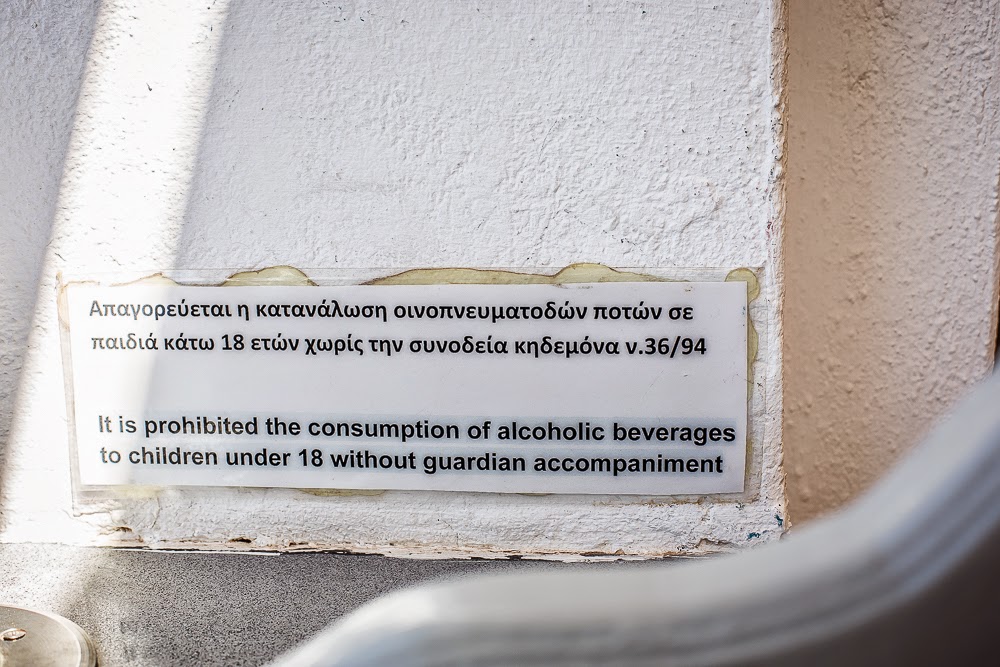 I’m not gonna lie yall, we were pleased as punch to take these pictures. But we were sweating buckets. It was hot as hell. Again, we didn’t just see Santorini, we endured Santorini.

We returned later for the infamous sunset, after lounging by the pool. The rumors were true: so many people on the island flock to the tip of Oía for the sunset that I’m surprised Santorini didn’t tip over into the sea. 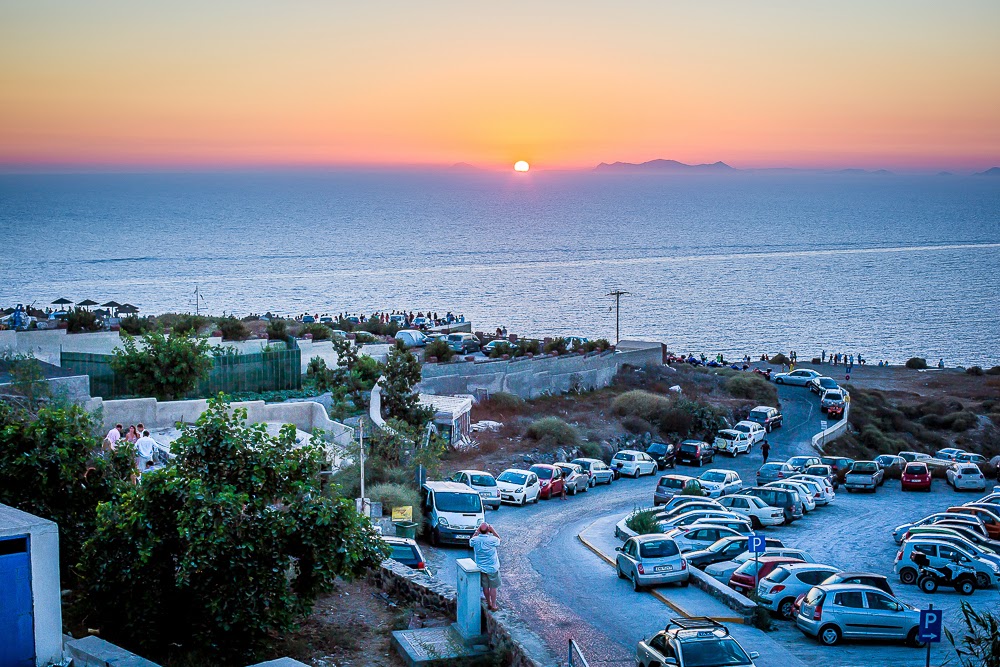 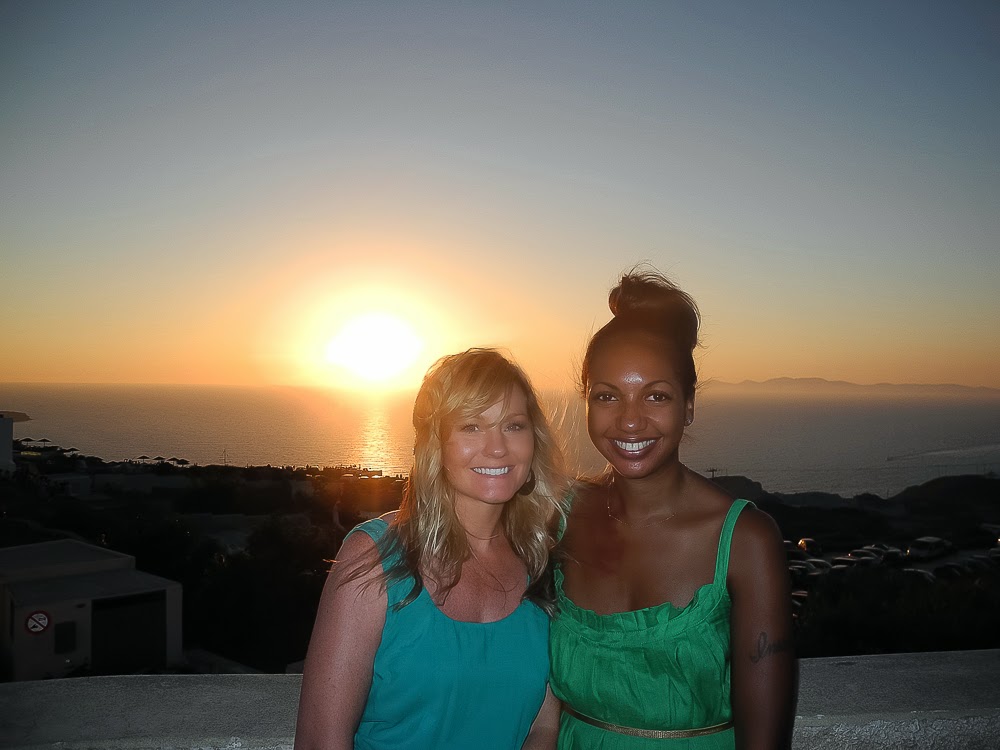 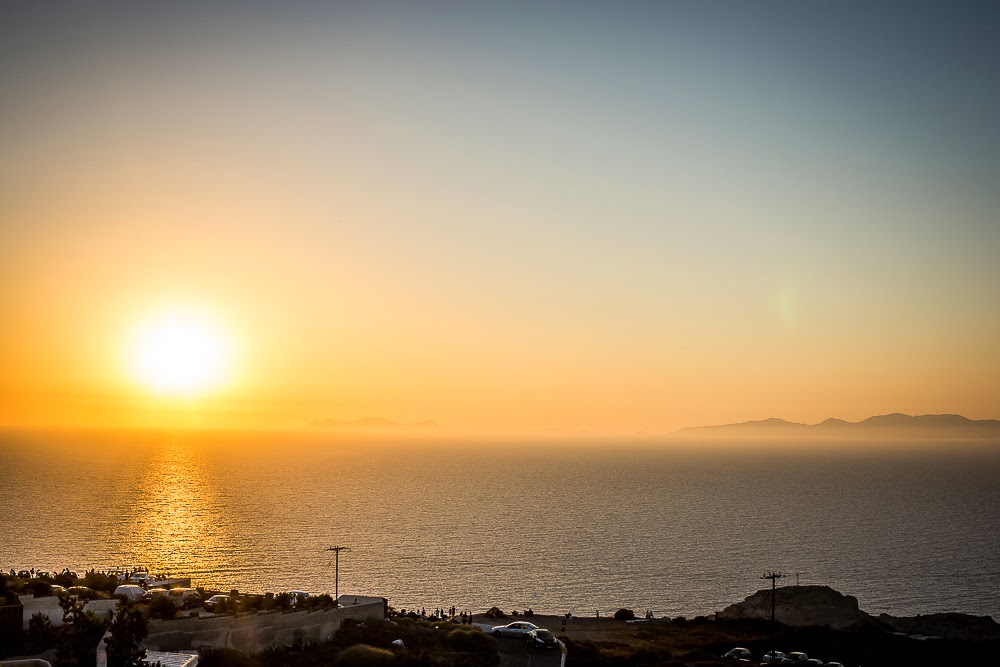 After sunset, the hordes of people made it very difficult to move, let alone leave Oía. So we waited it out at a restaurant that tried to cheat April and I, after making us wait 30 minutes for food. I argued with the manager, who flat out said to me, “You are wrong!” I paid what we owed (not what was on the bill), and left. He said he was calling the police. I told him to go ahead, and we got out of there as fast as we could. He yelled at us, “You are punks!!” as we hightailed it to our tiny rental car. 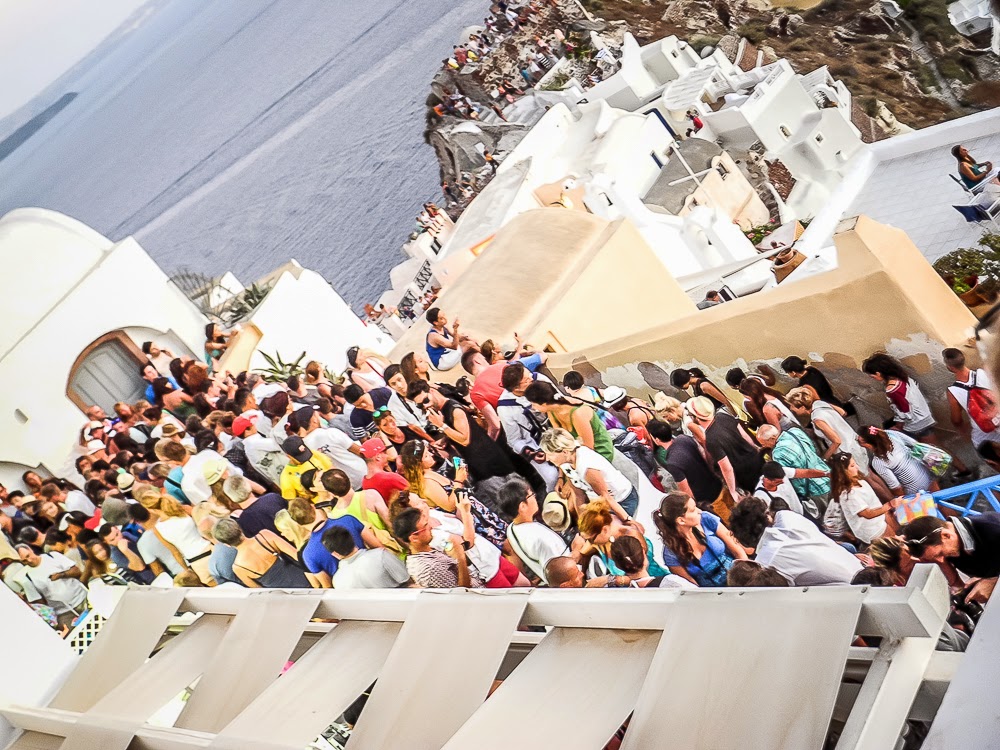 We immediately headed back to the Black Beach to get ice cream from a place called Chocolat. They served a brand called Mövenpick, and it might have been the best ice cream I’ve ever had in my life. And they serve it on a hot waffle with Nutella! 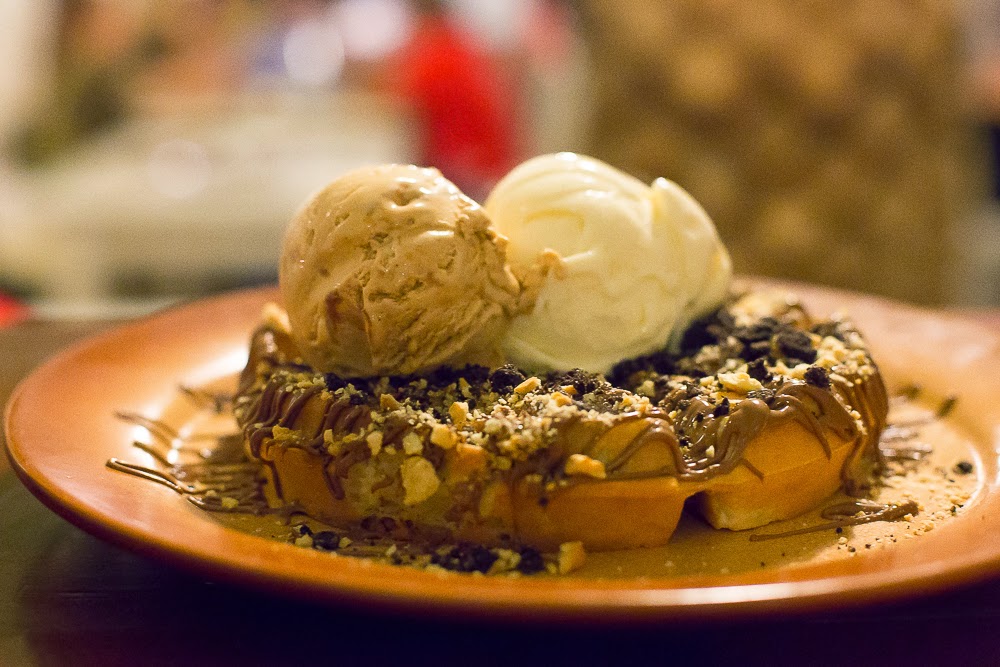 We couldn’t wait to leave Santorini. Pretty pictures certainly do not make a great place. We know this, and we went anyway, because we heard great things. But Santorini sucks. It’s an island with no real beaches, unless you like gravel pits. There’s nothing to do and it’s crowded for no reason. And guess what else? Salt water comes out of the tap, so you can’t drink it. You may think this is no big deal, but try brushing your teeth with it.

It is my recommendation that you never visit this wretched place that is Santorini, at least not in August. But there is a nearby location that I highly recommend…stay tuned for photos from our next destination: Mykonos!