Disclaimer: Please forgive the quality and shakiness of my photos and video. Soon you’ll be able to see how far I was from the stage, and although my camera has incredible zoom, any movement at all, even the beat of my heart, caused camera shake.

On Sunday, February 15th, seven friends and I attended the “New Jack Swing Valentine’s Day Love Jam.” It featured performances by Bell Biv Devoe, SWV, After 7, Blackstreet, and Tony! Toni! Tone! Our tickets were $84 tickets each and we couldn’t wait to go. So, how was the show?

If you were anywhere in the DC Metro area this Valentine’s Day weekend, you know that the temperature was near one degree Fahrenheit. On the night of the concert, girlfriends, guy friends, and couples celebrating Valentine’s Day showed up wearing big coats, little skirts, and high heels. The listed start time for the show was 7 pm, and I arrived at about 7:20.

After buying drinks from the cash-only bar and concession, the first performer, After 7, was announced around 8:30 pm.

After 7’s members wore matching suits like the Five Heartbeats and they even sang “Nights Like This.” 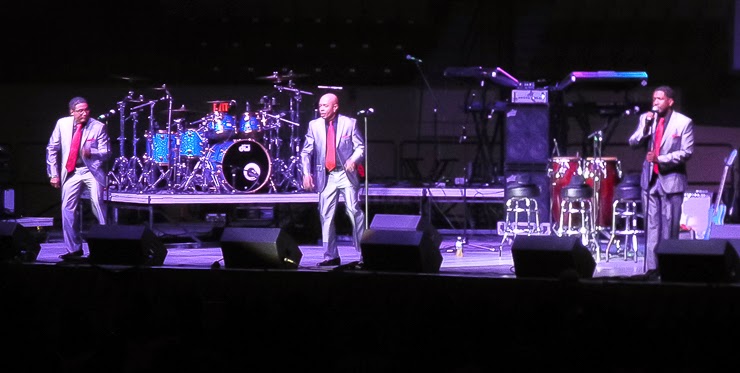 Kevon Edmonds sang his butt off. I always remember his voice because it’s so high and recognizable, but all of them sounded fantastic. “Ready or Not” and “Can’t Stop” were welcomed with screams from the audience. Couples were slow dancing at their seats. Their performance totally captured the theme of the show. It was beautiful.

There was about a 10 to 15-minute wait between each performer. Then came SWV. Were they good? Of course they were. They covered “I’m So Into You”, and “Rain Down On Me” and of course “Weak”. Coko amazes me by hitting every single note that you expect her to. I guess she never deviates from the original song and I appreciate that because we were ON IT — singing along and waiting for the high notes. She is phenomenal. My video ruins my depiction of her performance, but trust me, it was great. 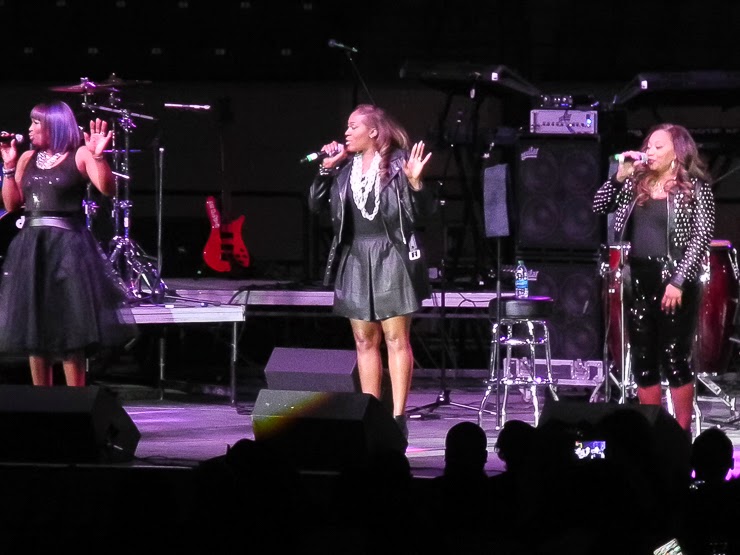 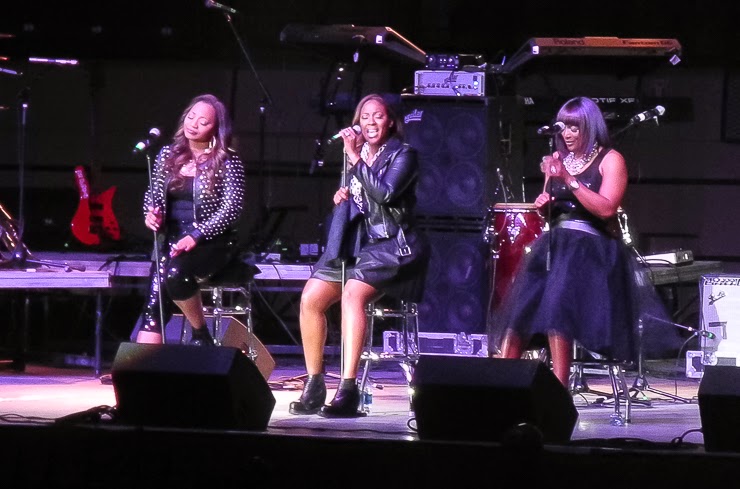 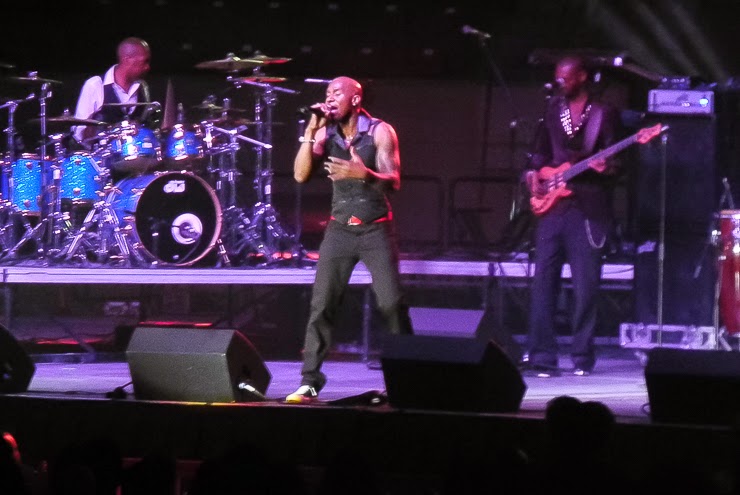 The band came out onto stage and immediately got started with “Little Walter,” remember that? Then a man came out, a bald guy, in great shape, dancing and jumping like Prince and singing his butt off. From our seats, he looked like Raphael Saadiq. He sounded like Raphael Saadiq.  I asked the person to my right if it was Raphael, and they said yes. I asked the person on my left, my good friend Angel, if it was Raphael, and she said yes too. I took pictures and even zoomed in and recorded video, and instead of scrutinizing further, I just enjoyed the show as they sang “Feels Good,” “It Doesn’t Rain In Southern California,” “Anniversary” and others.
Great performance! Raphael was full of energy and danced and jumped about the stage as he sang. At the end, one of the members announced all of the band members by name, including the lead singer, and 50% of the audience collectively gasped upon learning that he was indeed not Raphael Saadiq. By then, it was funny. He gave us everything Raphael would’ve, I suppose. Still a great show.
So we were waiting for Blackstreet when all of the sudden, Majic 102.3’s Adimu (our host) announces none other than…BBD? You mean BBD isn’t closing the show? What the hay? Blackstreet is closing? Before we could ponder this anomaly further, Ricky, Ronnie, and Mike enter the stage to a DJ and everything was 90s magic and starshine for about 20 minutes. People were HYPE. Women LOVE Ronnie. BBD even did a few New Edition snippets like “Candy Girl” and “Mr. Telephone Man” and “Cool It Now” because, face it, the group only had like three singles like “Do Me” and “When Will I See You Smile Again,” but we are all familiar with one: “Poison”, which they used to end their show in dramatic fashion. Side note: During their performance, Mike said they were “running late” and we didn’t quite know what that meant because everyone had relatively short sets. 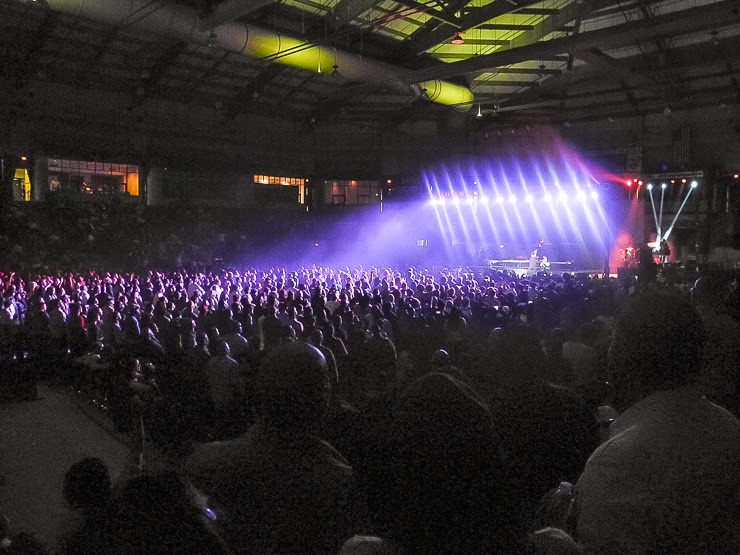 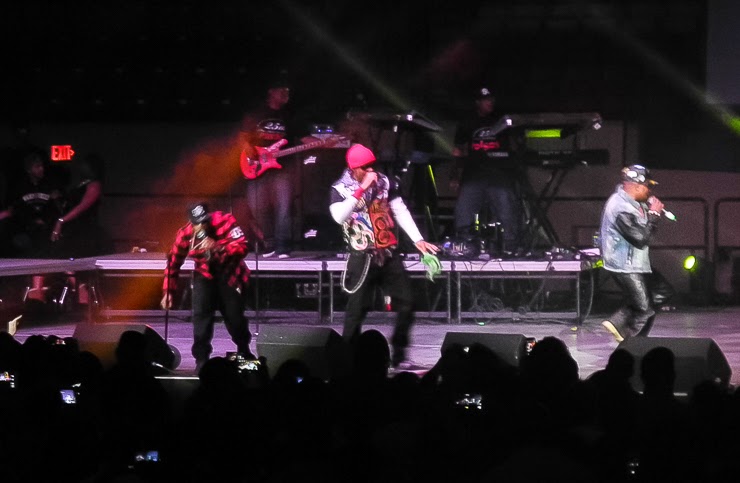 After BBD left the stage, about 15% of the audience started to leave too. We stayed because, hey, we’re already here, what’s the rush to go home? Soon, a huge screen on the stage showed a video montage of Blackstreet’s biggest hits and a booming recorded voice announced their performance for them (who needs a host?) and there they were. In all white. With glittery belts and chains on. Three of them, including none other than Teddy Riley. And people were so pumped for Teddy Riley, even though he sings nothing at all. The other two were busy singing their butts off, when a very large man, also dressed in white, entered the stage. It was one of the original members, David Hollister. People jumped out of their seats with excitement! Then he began to sing and sounded as magical as ever. “Before I Let You Go” , “Don’t Leave Me”, “No Diggity”, etc. Then Teddy Riley did his auto-tune on the keyboard by himself for a needless 6 minutes, and then they all came back out to finish their set with like two more songs and SHOWPLACE ARENA TURNED THE LIGHTS ON because it was time to go home. Time was up. Time: 11:15 pm.
Blackstreet continued on for about 3 minutes because people were really rockin’ to “No Diggity” but then the sound probably would’ve gotten cut too. What a great time nonetheless. Endless crowd participation and the immense nostalgia of a show like this can’t be beat. The end.