First, I’d just like to point out that the list of the Top 5 Most Annoying Words in 2017 actually includes phrases, which is more annoying than the words themselves. The list includes:
1. “Whatever” with 33%
2. “Fake News” with 23%
3. “No Offense, But” with 20% – which I consider a completely useful and meaningful preface to many, many, many discoveries
4. “Literally” with 11%, and
5. “You Know What I Mean” with 10%, which is also completely meaningful and useful phrase. What a cantankerous people we must be to be annoyed by that one. 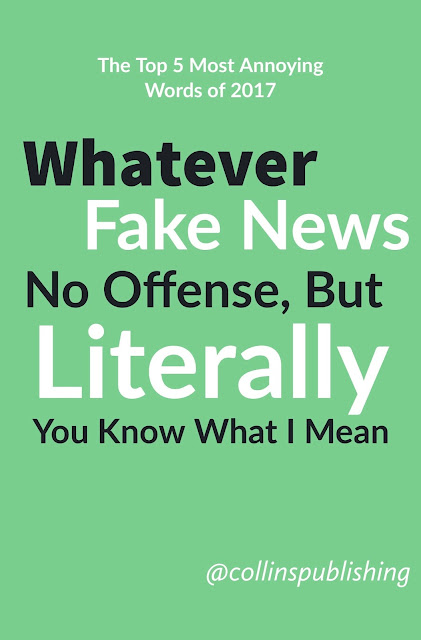 However, people really do overuse “literally” and most superlatives. Grand phrases like “That was the BEST pizza EVER” or “That was the best movie I’ve ever seen in my life” are easy to believe because our frame of reference pit stops at 72 hours.
I’d rank “literally” above all of the others, mainly because “whatever” is a neat little tool, useful to all of those who absolutely, must have the last word; to those who don’t wish to dwell on a lost gamble; to those who were picked last for the dodgeball team; to those who were forced to split the check at the end of the group dinner although they didn’t order drinks; to those who can’t choose between still or sparkling water, etc. It’s easy to say, and sounds decisive, although it isn’t. With its use, a topic is finished. We NEED “whatever” more than we know.
“Fake News” exists. We all know it, but it’s just been used so improperly by 45 and his administration that we’re tired of hearing it. But really, aren’t we really tired of hearing this guy speak any words? Can we vote that every word uttered by this current president are the most annoying words of 2017?
“No Offense, But” is awesome! I personally prefer, “Don’t take this the wrong way, but” and I usually butter up the follow-up with something positive. Then it’s harder to take offense. In the end, people are so easily offended that this phrase is necessary.
“You Know What I Mean” is also a good closer, like “whatever”. In fact, it’s not only a good closer, it’s a good segue and even takes the place of whole stories if you’re, say, at the workplace and might say something inappropriate. Or, if you can’t think of the words to finish a statement, all you have to say is, “you know what I mean”, with or without a question mark, and someone will automatically finish the statement for you. Which means “you know what I mean” is like magic. It’s magical. And nothing magical can be annoying. You know what I mean?
Insana
2017annoyingcollinseditingfivemostpublishingtopwordswriting
by Insana Collins
Leave a comment

Ask Insana, Feeling Lucky, Inspiration, Life, Stories
How Growing Up in a Big Family Taught Me Leadership and Organizational Skills

Ask Insana
How to Create a Strategic Plan